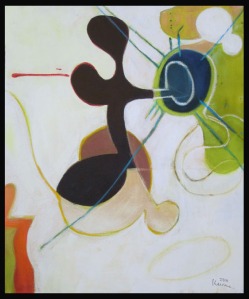 A little exhibition preview, this is the painting  featured on the announcement card. With the work for the show out of the studio, I’m putting things back to rights, which doesn’t sound like a huge undertaking, especially since my studio is rather an intimate space . . . but the method of my madness requires chaos, and chaos is a bloody mess to clean up. The great thing about it all, the cleaning process puts both a punctuation mark on the being done, as well as leaving an open invitation to start anew. I’ve one painting still in the works, a couple of canvasses waiting to be stretched, and a nice clean studio all ready for pandemonium’s return.

Continuing the countdown to the opening of my tenth exhibition at Perimeter Gallery, two paintings from the 1999 exhibition. My painting technique incorporates dry pigments and pastels, which requires the use of fixatives to hold these media in place while a painting is in progress, then once finished, a final application to

keep everything put. For over a decade, I’d used Blair’s #105 no odor, workable, matte finish fixative on my canvasses,  actually to the point its unique properties had become integral to my painting technique. But then Blair changed the formulation, eventually renaming it Blair #100, and the new formula just didn’t respond to my manipulations as my trusty #105 .  This group of canvasses were the last in which I incorporated the Blair #105 fixative into my dry pi

gment technique. I have one last can of #105, with a smidgen left inside, a Kurre historical artifact. I still use dry pigments and I still use a variety of fixatives (currently six different ones) but no single fixative plays the role Blair #105 did.

For the past couple of weeks I’ve revisited a few old favorites, Nick Cave and the Bad Seeds album “Dig, Lazarus, Dig!!!” and “Sandinista” by The Clash. But I heard Kathryn Calder of The New P

ornographers, has a new solo CD coming out. I really like what The New Pornographers do, so I thought I’d see if I could track down a few cuts from her latest effort titled Bright and Vivid. Bright and vivid, I don’t know about, but lush and atmospheric, most certainly . . . and then there IS her lovely and alluring voice. Hear the entire album here

It is an animal planet . . . Molly Teardrop, running wild during Arizona

Cattledog Rescue’s October’s Yappy Hour . . . and a Desert Tortoise out for a stroll on the Long Loop Mountain Bike Trail, McDowell Regional Park

thanks for reading! Cancel reply