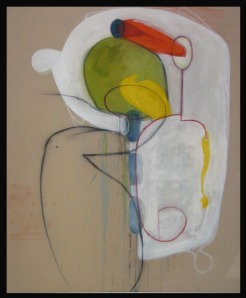 I’m doubling up, finishing off the revisit of past exhibitions at Perimeter Gallery. This week two paintings from the 2006 show and two from the 2008 show.

After almost four years of working in a twelve

by twelve-inch format, I went the opposite way, painting several large canvasses (54″ x 44″) interspersed between what I consider a more traditional size for my work (somewhere between a maximum of twenty-four inches and a minimum of eighteen inches). The canvasses were first stained with a concoction derived from sun-dried grapefruit (producing a wonderful, glowing earth tone ground), then worked on. Another hallmark of this group was my inclusion of areas of exposed canvas integrated into the composition. 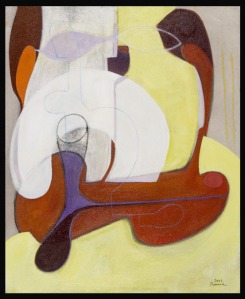 By the exhibition in 2008, I’d returned to working in the intimate scale which I believe best captures the spirit of my intentions. These

canvasses were also stained, now with Raw Umber, Anthraquinone Blue, Iron Oxide, and still painted on raw canvas. I love both the texture and color of canvas unprimed, plus I enjoy the challenge of a mark made, is a mark played. There is no going back, only paving over, and that seems a surrender . . . and surrender was and is, the very last thing on my mind.

I’ll be in Chicago this Friday, for the opening of the exhibition of the new paintings at Perimeter Gallery, if you’re in the neighborhood, please stop in. I’ll also post photos of the weekend’s events on my Facebook page, so please join me there. The show runs from November 18th through the end of the year.

I welcome any and all comments, thanks for reading! Cancel reply